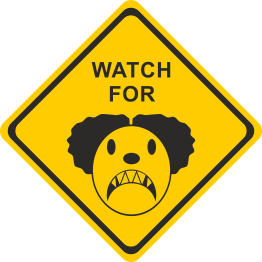 Creepy Clowns on the loose!

I don’t know if you’ve heard, but clowns are no laughing matter.

It started in August in South Carolina. Apparently, a group of men dressed as creepy clowns tried to lure children into the woods.  The police investigated and found a trail through the woods, but no clowns.

The incident went viral, and dozens of clown sightings have popped up across the country (And in Canada, who is supposed to be our more sensible neighbor). People are dressing up as clowns and scaring each other to death.  Most incidents are likely hoaxes, but several schools have closed or gone on lockdown after creepy clown sightings in the area.

It’s gotten so bad that Stephen King, who makes his living scaring the crap out of us, told everyone to chill out and give clowns a break.

Well, I’m here to report the danger is real. This week, I saw a creepy clown.

I was driving home from work when I saw a cluster of figures up ahead. I slowed the car and squinted through the windshield, eyeing the group with suspicion.

All of a sudden, a figure emerged from the center of the group. It was a clown, and he jumped in front of my car and waved his arms menacingly.  He wore big red shoes and had a face that will haunt my dreams—red nose, black star eyes, and a multicolored wig.

I slammed on the breaks. I should have been terrified, but in the face of mortal danger, I laughed.

Well, for one thing, is was five o’clock in the afternoon and the sun was out. For another, the creepy clown was about thirteen years old.  And his gaggle of preteen friends watching from his front yard took some of the bite out of his attack.

His friends watched warily for my reaction. I think they were expecting a reprimand of the “get off my lawn” variety. You little punks could scare someone or get hurt dressing up like clowns right now.

But I just kept laughing, and soon they were laughing too. The clown really got into his act, dancing around my car and doing his best to scare me.  Eventually he pulled off his mask and he was laughing too.  I beeped and we all waved to each other and I drove away.

The creepy clowns are out there, folks. I encountered one and lived to tell the tale.

This Halloween, be afraid. Be very afraid.