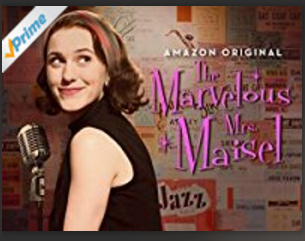 Note: This blog is spoiler-free.

It’s pilot season on Amazon Prime. For the uninitiated, this a time when Amazon Prime releases one episode of several potential television shows.  Amazon Prime members watch and vote, and the shows with the most votes are green lighted for a full season.

You have to check out The Marvelous Mrs. Maisel.

Midge Maisel is a 1950’s Jewish housewife who has it all and loves it: happy marriage, two kids, an apartment on the Upper West Side.  Her husband moonlights as a stand-up comedian even though it’s obvious that she (though Midge doesn’t realize it) is the funny one.  By the end of the episode, Midge’s world is turned upside down and she sets on a new path of adventure.

It takes a lot to get me to watch a new show from the beginning. In the binge-era, I like to let three or four seasons build up before I partake.  I’ve had my heartbroken too many times by loving shows only to see them cut down before their time.  (Like Moonlight. Or GCB. And especially Dracula. I will never forgive NBC for depriving me of more Jonathan Rhys Meyers as the King of the Undead in steampunk London.)

Back to Maisel.  I gave it a chance because it’s written by Amy Sherman-Palladino, the brilliant mind behind Gilmore Girls.  (And Bunheads, another one season heartbreaker.)

Maisel is simultaneously nothing like Gilmore Girls and yet quintessentially Sherman-Palladino.  Midge is a quirky and likeable heroine—beautiful and competent and funny with enough flaws to keep her from being insufferable.  Like Gilmore, Maisel promises to be a show driven by witty dialogue and family dynamics.  No cars blowing up, cynical antiheroes, or brutal murders.  This will be a show about a barrier-breaking woman who would’ve been perfectly happy being the perfect housewife.

To say more would be to give too much away, and I’ve promised no spoilers.

Suffice it to say I love it already, so I need your help.

Maisel strikes me as the kind of show that needs some room to bloom. As discussed, it’s got a weird premise, no explosions, and is set in the 1950s.

In other words, it might not rake in the votes on Amazon Prime.

So if you have Amazon Prime, give it a chance, and if you love it, vote for it! If you hate it, keep your opinion to yourself.