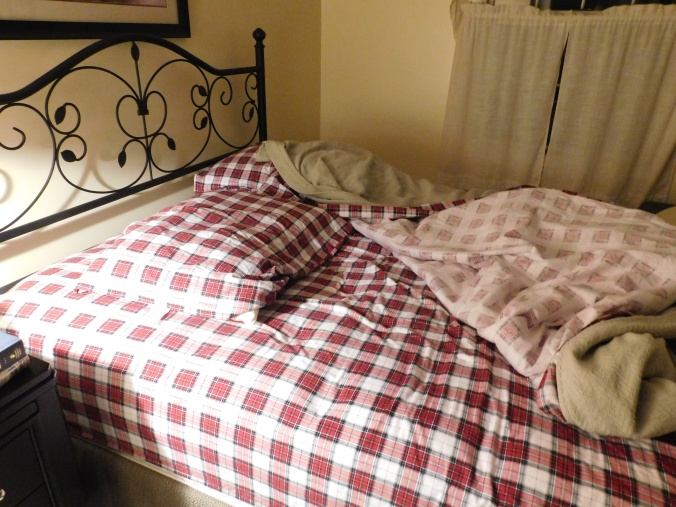 This morning I won the battle.  But tomorrow is another day!

Each morning, I fight a battle.

I like early mornings. I have a lovely feeling of accomplishment when I clock in a workout or a writing session before the sun comes up.  There’s nothing more virtuous than putting a dent in your to do list while the world sleeps.

But to get the early morning, I have to win the battle.

Me versus the snooze button.

I’m in a dead sleep when the buzzer goes off. I try to think about my to-do list, or the feeling of satisfaction, or even the coffee I can drink if only I get out of bed.  But my mind thinks of only one thing:  ten more minutes.

Whoever invented the snooze button should be shot. Ten extra minutes of sleep after you’ve been jolted awake by a jarring buzzer is useless.  Every expert will tell you so, and I believe them.

But what about two snoozes, or three or four or five? I’ve been known to hit the snooze button for over an hour.

I know that’s crazy. Why don’t I just turn off the alarm clock and go back to sleep?  Because if I do, I’ve lost the battle.

That instead of waking up early, I’m “sleeping” until the last possible moment, then rolling out of bed frazzled, rushed, and disappointed in myself. It’s a terrible start to the day.

Years ago, I moved my alarm clock across the room, forcing myself to get out bed to shut it off. You’d think this would force me to either stay up or turn the alarm off altogether.

I jump out of bed, cross the room, hit the button and dive back into bed like I’m taking cover from a grenade about to blow. If only I could get myself to bed ten minutes early each night with as much gusto as I have for those ten snoozed minutes in the morning.

Today I won the battle. I hit the snooze button three times, but I’m still awake at 5:30 on a Sunday morning.  Today I’ll get done more before noon than I usually do in an entire weekend.  I’ll praise myself and calculate how much more I’d get done, how much happier I’d be, if I woke up this early every morning.  I’ll set the alarm for 5 am tomorrow morning, then note in my planner that I’ll get on the treadmill, read the newspaper, and do a load of laundry before going into the office Monday morning.  The best laid plans.

Ha! As everyone knows, the best laid plans are often blown up 10 minutes at a time.

By the damned snooze button.