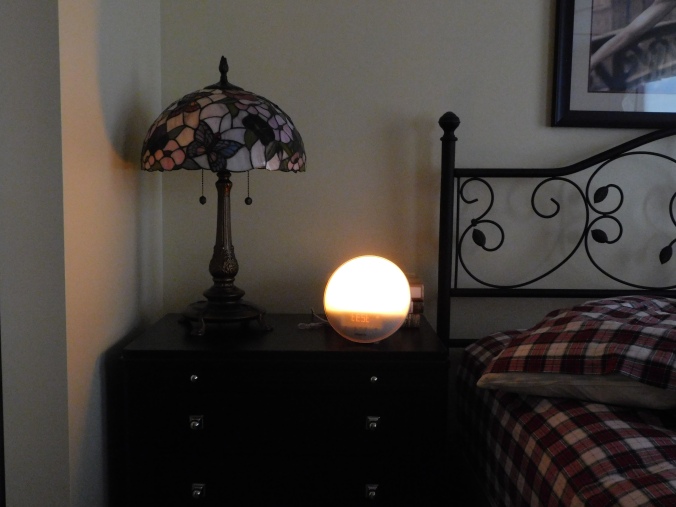 If you read this blog, you already know about my daily battle to wake up early.

Two weeks ago, I found a secret weapon. It’s called a sunrise wake up alarm clock.  The idea is genius:  instead of being jarred from a deep sleep in the pitch black by a buzzing alarm clock, the sunrise clock wakes you up naturally.

Here’s how it works: thirty minutes before your designated wake up time, a deep red light comes on.  It’s not bright enough to fully wake even the lightest of sleepers.  Over the course of thirty minutes, the deep red turns to orange, then yellow, then finally a stark white light.  The idea of the light is to mimic a natural sunrise.  At the end of the thirty minutes, the sound of seagulls and crashing waves play.  Voilà!  You gently rise from your slumber, as refreshed and pretty as Sleeping Beauty after her fair prince’s kiss.

I ordered the light off Amazon pronto, and set it for five o’clock Monday morning. I went to bed Sunday night with visions of a peaceful awakening dancing in my head.

What could go wrong?

At 4:30 am the deep red light turned on as planned. While this light did not immediately wake me, it did wake up my cat Jasmine.  From the foot of the bed she let out a surprised meow that stirred me.  I saw the red light and turned back, knowing I had thirty more minutes of sleep.

But as the light’s strange glow intensified, so did Jasmine’s distress. She began crawling on me and meowing.  When I pushed her away and pulled the covers over my head, she redoubled her efforts.  She jumped on my face, stepping on me and meowing with an intensity that clearly said, “That thing you brought into my house yesterday?  Apparently it’s radioactive and I am trying to warn you and you are DOING NOTHING!”

I pet her head and told her everything was fine as the fake sun rose in my bedroom, eventually blinding us both.

Just when Jasmine thought it was over, the birds began chirping. Her ears twitched, and then she stood up and looked around frantically.  She jumped off the bed and raced through the house at breakneck speed.

I rolled out of bed, a mirror confirming my un-Sleeping Beauty-like appearance and followed after Jasmine. She was at the window in my office, standing on her back legs with two paws pressed to the window.  Her ears were pitched and every muscle in her little body quivered.  She was scanning the backyard, looking for birds.

The birds she head chirping from the alarm clock.

I turned off the clock with one eye closed, as like the sun, you should not look directly at this clock. Jasmine and I went into the kitchen.  I gave her a double helping of kitty treats and myself an extra scoop of coffee.

But I’ll say this for the clock…at five am I was wide awake.