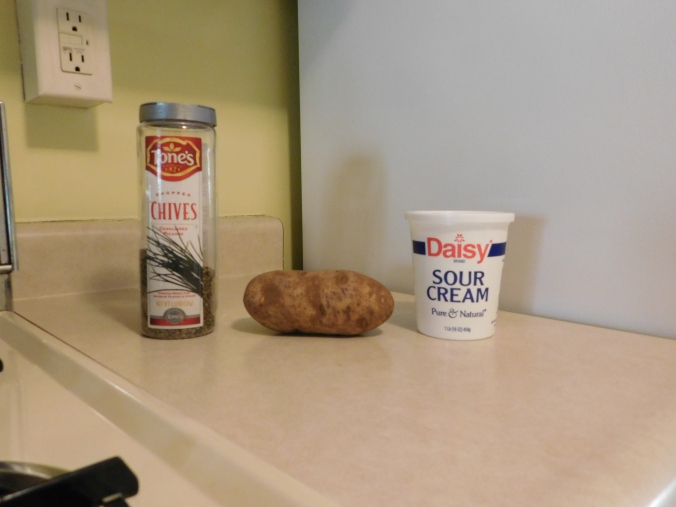 Now that’s what I call dinner!

When I was growing up, we ate baked potatoes three days a week minimum. If you grew up with me, you know I’m not exaggerating.

My mom would sell it as a big treat. I’d walk in the door from school, dump by backpack on my desk, and she’d say, “Guess what?  We’re having baked potato bar for dinner!”

Now, if you’re a normal person, the words baked potato bar conjures up an image of abundance.  Bacon, gooey cheddar cheese, maybe even some mushrooms.

And the toppings? Sour cream and chives.  That’s it.  Always.  With water to drink.

I’m pretty sure the inmates at San Quentin eat better.

But Mommie Dearest loves baked potatoes. In her mind, this was the ultimate treat.  Her Dad was the exact same way, though he liked his potatoes anyway he could get them…mashed, fried, au gratin, you name it.

In the beginning, I had no beef with baked potatoes. But seriously, at times we ate them for days on end.  White potato with white sour cream, the blandest dinner plate you ever saw.  Even it if did have a few green chives sprinkled across it.

I swore when I moved out that I would never eat another baked potato again. And mostly, I stuck to that.  I’d eat one with my ribeye when dining at a steakhouse.  But otherwise, forget it.

But recently I started having second thoughts. It started when I was having some mild tummy trouble and needed to eat bland foods for a few days.  Baked potatoes was on the short list, and I gave in.

I made it just like mom used to do. Scrub, poke it with a fork, and toss it in the microwave for ten minutes.  Garnished with sour cream and chives.

Reader, it was damn good.

A few days later, I ate another one. And another after that.

I’ve eaten half a dozen baked potatoes in the past month.

When I want to visit my mom this weekend, she asked me what I had for dinner the previous night (no one in the world except your mother cares what you ate for dinner last night), and I sheepishly admitted, “A baked potato.”

My Dad’s eyes popped out of his head. I thought my mom was going to say, “What?  I thought you hated baked potatoes?”

Because she knew the truth.

All of us, whether we want to admit it or not, are slowly becoming our mothers.