The secret to my success.

During the blink of an eye that I was on the Whole30 diet, I found a recipe for mushroom and chicken soup. I’m a fan of mushroom soup, so even though my Whole30 is over, I decide to get adventurous in the kitchen.

I feel like a contestant on Survivor looking for a hidden immunity idol as I search through Giant Eagle.

Is it in the dry goods section with the powdered milk? No.

With coconut milk? No.

In that weird aisle by the produce with strange “healthy” drinks like acai energy juice, pre-mixed smoothies, and kombucha juice? In the dairy aisle with real cream?  With the almond milk?

(Side note: Whole30 loves kombucha juice.  Just another reason why my Whole30 was a Tortured5.)

I don’t want to give up, but I don’t know if Giant Eagle even stocks such a thing. I mean, looking for a needle in a haystack is bad enough, but what if the needle isn’t even there?

Finally, I look it up on my phone (“where is coconut milk in the grocery store?“) and find it by the pina colada mix, just where google said it would be.

(Another side note: You can tell a person’s age by how and when they use their phone.  If I’d been under twenty-five, I would’ve googled it the moment I walked through the door.  If I’d been over sixty, it never would’ve occurred to me to google it at all.  But I’m in that no man’s land between millennials and gen-exers, where it only occurs to me to google something after all traditional search methods have been exhausted.)

Coconut milk looks gross. I think about putting it into my lovely mushroom soup, and I have flashbacks of plant-based coffee creamer and no Pepsi.  I tremble.

Then I remember: I’m not on Whole30.  Just because the recipe calls for coconut milk doesn’t mean I have to use it.

I go on the reverse-substitute hunt. Instead of finding a healthier ingredient replacement, I’m looking for the full-fat version.  After reviewing my options, I settle on heavy whipping cream.

The next morning I wake early and get to work. I wash and slice three pounds of mushrooms, then scrape the leaves off twenty stalks of thyme.  After browning onions, mushrooms, and the thyme, I add the cream.

The next step is to blend the mixture until smooth. When I pull the blender off the top shelf of my pantry, the glass carafe slips from the base and hits the floor.  Fortunately, the glass doesn’t shatter.

Unfortunately, a piece of the plastic base broke off.

This is a problem. But I’m in too deep to stop now.

I spoon the mushroom mixture into the blender and hold the carafe steady with both hands while the machine chugs along but doesn’t truly blend. I try everything:  taking some of the mixture out and blending it in smaller parts, turning up the speed, turning the setting to liquify, then to breaking ice. 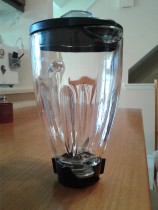 The plot (and soup) thickens…

But since the bottom of the carafe no longer fits snugly into the base, it won’t work quite like it should.

The recipe called for “blending until smooth.” I settle for grainy-chunky.

After some final heating, I sit down to a steaming bowl of mushroom soup. I take a spoonful.

I barely believe it, but it tastes wonderful. It is creamy and smooth-ish and filling.

This I know: It might have been better with a properly working blender, but it wouldn’t be anywhere near as good with coconut cream.