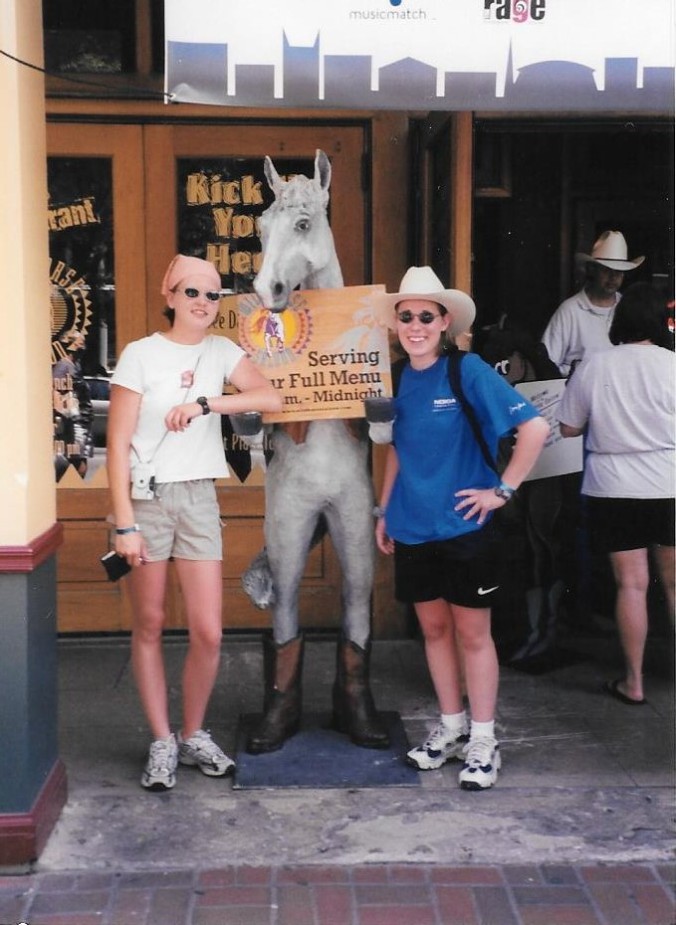 Tammy and me at the Wild Horse Saloon.  This was after we ate the sandwiches.  Obviously.

Do you remember the best meal you ever ate?

My friend Tammy and I decided to pilgrimage to Nashville, Tennessee, Music City itself, the capital of country music.

We were in college (read: broke) but that wasn’t going to stop us from going to the Country Music Festival to see all of our favorite stars, including JoDee Messina, Tim McGraw, and Billy Ray Cyrus. (Miley who?)

We hit the road early to begin the ten-hour journey in Tammy’s Honda Civic. At first, it didn’t seem like a big deal that the Civic didn’t have air conditioning.

For the first hour, we chatted excitedly about the trip ahead—all the music, the stars, the autographs, the concerts. We rolled down the windows and hit the interstate, blasting Trisha Yearwood’s Wrong Side of Memphis on the radio.

In the second hour, the world started heating up, and the reality set in.

We were traveling south in July, on a bright, sunny, ninety-degree day.

In a car with no air conditioning.

And by the way, when we arrived at our destination, there would be no air-conditioned hotel room waiting for us. We would be camping in a tent and sharing what turned out to be a spider infested outdoor community shower.

The third hour we got cranky.

The fourth hour is best forgotten, as our friendship barely survived it.

By the fifth hour, we were as wilted as a bouquet of week-old grocery store flowers. We didn’t even have the energy to snipe at each other anymore.

When Tammy grew so dehydrated that we worried she couldn’t drive the car anymore, we pulled off the interstate into one of those rest stops with only bathrooms and vending machines. Not another human being in sight.  I had never been hotter, sweatier, or more delirious in my life.  We were like characters in a movie wandering through the desert, when the screen goes hazy.

We bought two Cokes from the vending machine (you know I’m a Pepsi girl, but this was life or death), and slid down the concrete wall into a patch of shade outside the building. We opened the cooler we’d packed and there they were.

It was rain in the desert. It was manna from heaven.  It was the closest I’ve come to a miracle.

I’m not sure we would have made it to Nashville without those sandwiches. You might’ve just found an abandoned Honda Civic, the seats wet from the puddles of sweat we’d dissolved into.

But we made it, and we had the time of our lives.

Tammy and I still talk about those sandwiches. The vacation too, but mostly the sandwiches.  We just talked about them last weekend.  They saved our trip, our lives, and our friendship.  I’m not sure I will ever eat anything in my life that tasted as good as that sandwich.

If I wind up on death row I know just what I’m ordering for my last meal.

(Though if I didn’t kill Tammy during hour four of that car trip, it’s highly unlikely I’ll ever kill anyone.)