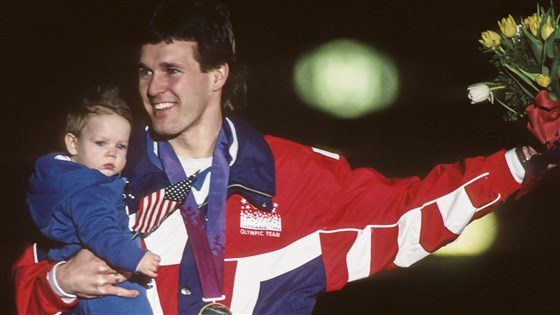 Dan Jansen with his daughter, after winning gold in 1994

I have to write about the Olympics this week. If you know me at all, you know that.  The Olympics are the granddaddy of all my pop culture obsessions:  bigger than William and Kate, bigger than Nora Roberts, and yes, even bigger than Outlander.

I love the Olympics, the Winter Games in particular. I think it’s a combination of fascination with the ice and snow sports vs. the track and field, but also because the Winter Games take place in February, also known as the worst month ever.  Just like everyone else, I’ve got a lingering cold, and am simultaneously going stir crazy and deeper into hibernation.  Two weeks of riveting television is just what I need to kill the rest of this depressing month.

And for my money, the Olympics is the most riveting television ever made. It’s the perfect combination of sports and story.  It’s basically like you took the Superbowl and Oprah and mixed them in a blender and out came the Olympics.

You’ve got athletes toiling away in relative obscurity for four years while they wait for their chance at fame, redemption, or glory. But of course, those are only the ones that become household names.  Winners in figure skating or alpine skiing.  There are thousands of other athletes whose names we never know or quickly forget who are not there with a shot for a medal.  They are the ones with no fancy sponsorships, no big payday waiting if they can cash in on the biggest stage in the world.

But every Olympian wants the same thing: to perform at their absolute best when everything is on the line.

To watch someone rise to the occasion in this way, whether they come in first or last, is truly inspiring. To watch someone falter, or let it slip through their fingers, is heartbreaking.

And to me that is life in a capsule. Moments of glory, despair, redemption.  One thing I love about good fiction is that it gives us the closure we so often don’t get in life.  In good fiction, the detective always gets his man, the guy always gets the girl, the wronged are vindicated, the evil punished.

But it’s not that way in real life, nor in the Olympics. Think of Michelle Kwan—the most dominate female figure skater in U.S. history with nine U.S. championships and five world titles—she never made it to the top of the Olympic podium.

On the other side, you have Dan Jansen. In 1988 he was heavily favored in two speed skating events.  Hours before the first race, he learned his sister had passed away from leukemia.  He fell during the race, and a few days later, he fell again while on world record pace.

Four years later, in Albertville, he was back, and met with more disappointment when he failed to medal or skate his best in his two events. The next year, outside the Olympics, he set a world record in the 500 meter race after placing fourth in the Olympics.

Outside the Olympics, he continued to set records in the 500 meter race, and the stage was set in Lillehammer in 1994. Again heavily favored in the 500 meters, he finished eighth.

A few days later, he took the ice for the 1,000 meter, the last race of his devastatingly disappointing Olympic careers. The 1,000 meter was never his best event, and he wasn’t as young as he used to be, and no one gave him much of a chance to medal.

When he put his toe on the line of his first Olympic race, as one of the best speed skaters in the world, I’m sure Dan Jansen would’ve felt that winning only one Olympic medal in his career would be a disappointment.

But I’m betting he didn’t feel that way six years later on the top of that podium in Lillehammer.

By the time he won his gold medal, I’ll bet it wasn’t about the medal at all.